The Coronation of the Virgin Mary Assumption University 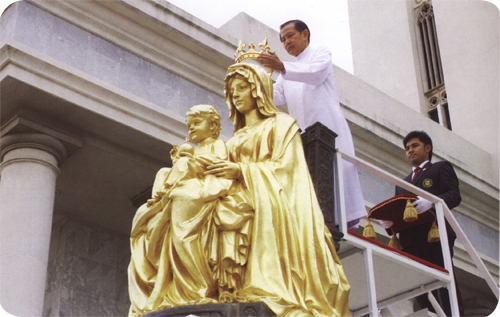 According to the calendar of the Church, the 15th of August is marked for the Feast of the Assumption of the Virgin Mary. As the university bears the name of this august phenomenon, it is but pr5oper that it should be celebrated with great devotion every year.

To solemnize the occasion, in 2001, the President of the University has created a special ceremony to crown the statue on the eve of the Feast of the Assumption and to honour the Virgin Mary as Mother and Queen of the university.

According to the taught by St. Louis Marie de Montfort, Christ is the wisdom seated on the throne. This implies, on the one hand, that the Mother of Christ is the dwelling place of the supreme wisdom of all science. 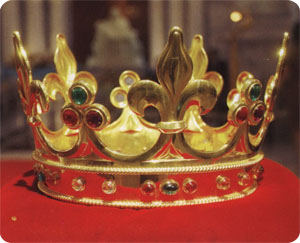 A goldsmith was commissioned to craft a crown of pure gold for the statue of the Virgin Mary. On 15th August 2001 this gold crown was blessed by His Grace Bishop Lawrence Thienchai Samanchit. 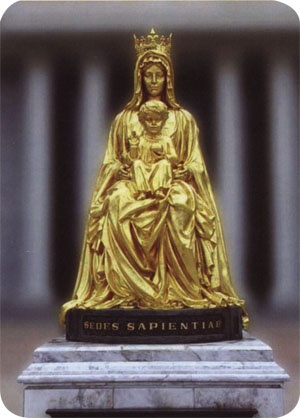 When the Bang Na campus was under construction a statue“The Seat of Wisdom” was ordered to be sculptured in bronze and gold-plated and to take the pride of place in front of the Cathedral of Learning, overlooking the panoramic scene, facing the rising sun at dawn. The Virgin Mary wears a crown of pure gold of 2.2 kilos studded with precious stones of different colours. The statue was blessed by H.E. Michael Cardinal Michai Kitbunchu on the 8th December 2000. On this same occasion the Cardinal also blessed other university buildings. 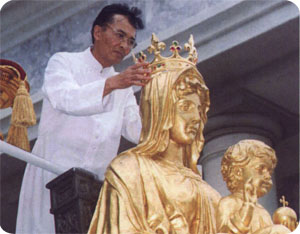 N.B. The artistically crafted crown of pure gold is normally kept in the safe deposit vault of a Bank and is brought out for devotion and dedication every year on August 15.

On the other hand, the university is the Alma Mater, or our mother who is also the “Dwelling Place of Knowledge”. In this context, “Assumption” which besides its religious connotation in glorification of the Mother of Christ, has yet another meaning in Thai language “The Abode of Abiding Knowledge”. Rightly, “Assumption University” is the Seat of Wisdom.

My it be known to all in the years to come that this ceremony of the crowning of the Virgin Mary is observed with solemnity among the university community to bring blessing and protection to all.